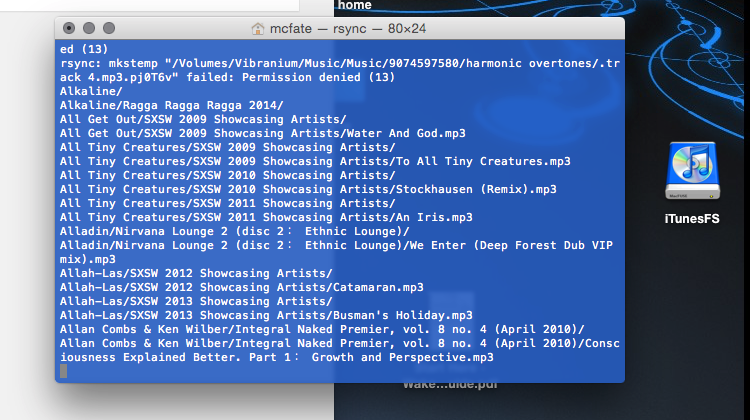 I set up a new MacBook Pro several months back, but in moving things around, I managed to misplace some music. Most of my stuff is on a 160GB iPod Classic, and I wanted to synchronize the contents of the iPod with my iTunes library, recovering any tracks that were on the iPod but not in the library.

Out of the box, Apple doesn’t make this especially easy for you. Syncing within iTunes is strictly a one-way affair: what’s in your library replaces what’s on the iPod, precisely the opposite of what I want. Mounting the iPod on the desktop doesn’t help — you only get access to a shared file area, and the music is organized in a way calculated to keep you from figuring out where anything is.

Fortunately, there’s an easy solution, but it takes a few pieces to put together. This presumes that you’ve got your music in one folder on your computer, and you’re letting iTunes organize it for you (which it will do by artist).

First, you’re going to need FUSE for OS X, which allows you to create user-space file systems on OS X. Download the .dmg file — current version is 2.7.4 — and install it.

That sets you up to install iTunesFS. Download the iTunesFS 1.3.4 installer disk image from the downloads page, mount the .dmg and drag the iTunesFS app to your Applications folder.

Connect your iPod to an available USB port on your Mac, but don’t launch iTunes. Instead, launch the iTunesFS application. An “iTunesFS” icon will appear on your desktop, and opening it will reveal several folders, “Albums”, “Artists”, etc. You want the “Artists” folder.

Open another window and browse to your iTunes library folder — you can find out where this is under the “Advanced” tab in iTunes’ Preferences. You want the “Music” folder. (You’ll see why we want these files open in a moment.)

Now, open a terminal window. We’re going to use the rsync command to copy any files that exist in the “Artists” folder on the “iTunesFS” volume — a synthetic folder constructed by iTunesFS which mirrors the organization of the “Music” folder in iTunes’ library folder. Type the beginning of the command:

Leave a trailing space at the end. Now, go to the “iTunesFS” window in Finder and drag the “Artists” folder on top of the Terminal window, and “drop” it there. The Terminal app will fill in the path to the folder you dropped, and the command will now look something like this:

Add a trailing slash and a space at the end, so it looks like this:

Now, go back to Finder, and from the window that’s open to your iTunes library folder, drag and drop the “Music” folder onto the Terminal window. The command should now look something like this (it will vary depending on the names of your volumes, etc., obviously):

The --dry-run flag tells rsync to just simulate moving the files, this will give you a chance to check that things look reasonable first. The -av flags tell rsync to use “archive” mode, which means it will walk down the directories within the folder you specify recursively, and to provide “verbose” output. Execute the command, and it will provide a list of all the directories the command would create and the files it would move. If you’re satisfied with what you see (and you probably actually want to review it!), use the up-arrow to bring back your last command, edit out the --dry-run flag, and execute it again.

We’ve been hearing a lot about a very serious exploit in a universally-deployed piece of software, the “Shell Shock” bug in the bash shell. I got an alert late yesterday evening, and immediately upgraded the software on my publicly-facing servers.

There’s been some discussion of whether or not it’s an issue for OS X, and some debate over whether it’s a significant exposure on that platform. I didn’t think it was, but I haven’t seen an update for OS X Server to patch it, for example.

My own version of bash is managed through Homebrew, so rather than the stock 3.2, I’m running a newly patched and up-to-date v4.3.25(1). However, I got curious, so I decided to check the stock OS X version of bash for this exploit, and here’s what I found:

So, the (rather antiquated) OS X version of bash, which has a “modified” date of May 10, has already been patched to disallow this hack, or so it would appear.

UPDATE: Apple’s given a statement on iMore that OS X users should not be at risk from the “Shell Shock” exploit unless they have “advanced UNIX services configured”. I’m not sure which specific “advanced UNIX services” they’re referring to — at a guess, “Web Sharing”, which I don’t do, seems a likely suspect — but that may be the explanation for the commenters reporting vulnerability and me not seeing it on my system (either in /bin/bash or in /bin/sh)…

The vast majority of OS X users are not at risk to recently reported bash vulnerabilities,” an Apple spokesperson told iMore. “Bash, a UNIX command shell and language included in OS X, has a weakness that could allow unauthorized users to remotely gain control of vulnerable systems. With OS X, systems are safe by default and not exposed to remote exploits of bash unless users configure advanced UNIX services. We are working to quickly provide a software update for our advanced UNIX users.”